Professor Scott Lucas of Birmingham University, UK, is well known for his lies and misinformation. In this article I expose two examples of those lies. 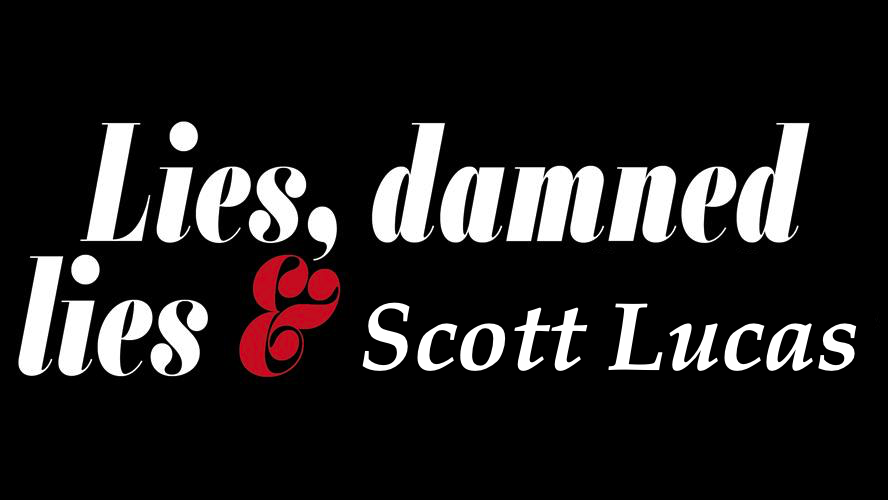 Scott Lucas is an American academic based at Birmingham University in the UK as a Professor of International Politics. He is best known for his grand and unsubstantiated claims on Twitter. He is also well known as an obfuscater who deliberately misinforms and misdirects.

Professor Lucas, whilst being a fringe activist for all shades of the Syrian opposition, uses the platform provided to him by his university to attack and deride anyone who dares even suggest that “The Army of Islam” (a radical Jihadist group in Syria that Scott lends propaganda cover to) may have staged a chemical attack in Douma in 2018. He won’t hear any tell of it and during his defence of the group even goes as far as to attack other UK academics. A behaviour not befitting academia, as a whole:

The same Professor Lucas also lends media cover to another radical Jihadist group, who are designated terrorists in the west, Hayat Tahrir al-Sham or otherwise, al-Qaeda in Syria. This group was in charge of Khan Sheikhoun when a sarin incident took place in the town in April 2017. Scott again acts as a defender for the narrative spread by this group and derides anyone who questions their version of events.

As will be shown, Scott doesn’t investigate claims made in Syria for the truth but rather he acts as a propaganda arm for Jihadist claims going as far as to make up fake claims he cannot back up with evidence.

Here is one such incident.

Scott ceased all communication with me back in July 2019 after I had exposed him making fake claims of having a source at the OPCW from 2013, in connection with Syria. In his typical fashion, he blows smoke to blur the given claim he is struggling to defend. The problem for Scott is that I ignore the smoke and stay focused on the issue at hand. A propagandist doesn’t like this type of exchange so they soon opt out.

But before opting out Scott was asked about a detailed study that I carried out that showed the opposition, that he supports, had staged a chlorine attack in Douma on the 1 February 2018. Here is his response:

He didn’t dispute my findings or the evidence I presented. Instead, he attacks the person. Now bear in mind, this is a Professor at a respectable UK university.

He made no effort to communicate further with me since then until yesterday, 14 January, 2020. Why did he break his silence? Well, Scott doesn’t like his lies being exposed on a public platform and, as stated, will go to extreme lengths to try and prevent that happening. Those lengths consist of telling more lies, as you’ll see herein.

He posted a monologue on his YouTube channel where he went after an OPCW whistleblower who uses the name “Alex”. Scott has been hell-bent on trying to discredit “Alex” and Ian Henderson, a second OPCW whistleblower on the much discredited chlorine attack in Douma on April 2018. Mr Lucas also uses the opportunity to go after the aforementioned UK academics I mention elsewhere in this post.

Seeing Scott leaving himself exposed in this manner and understanding that he would feel compelled to answer any comment left that challenges his Jihadist apologia I decided to ask him to address a fake claim he’d made previously.

There are two fake claims here. One is that the OPCW did *not* claim to have a chain of custody “for KhanSheikhoun” (they never visited the site so this was not possible) and secondly, it is not just “pro-Assad propaganda” (anyone who disagrees with Lucas’ apologia for Jihadists) that are claiming the OPCW never had chain of custody, but the OPCW themselves:

I decided to ask Scott about this in the comments section of his YouTube monologue. (PS: He has filtered the exchange from the main view of the comments so you have to manually select “Newest First” from the drop window at the top left of the section under “Sort By”)

To keep this section condensed and focused I will only provide some of the lengthy exchange. I invite you to go and read the full thing (after you’ve unhidden it) over on his channel.

So I asked Scott if he could explain the tweet he made. His response has baffled and confused many a Syria watcher on Twitter, given the feedback I’ve had to it:

He clearly has no idea what a chain of custody is and gets himself tangled in knots trying to both explain his ignorance whilst also attempting to defend his tweet.

I inform Scott that the JIM were unable to obtain a chain of custody for samples at Khan Sheikhoun and that they never visited the site. These two statements are factually correct and, what’s more, taken directly from the JIM report. Scott responds in his usual style of adding more lies to cover for lies. He claimed that I was “flat-out wrong”.

14. The Mechanism did not visit the scenes of the incidents at Umm Hawsh and Khan Shaykhun

Knowing he was tangling himself in a web of misinformation Scott then tried another of the go-to tools in his obfuscation toolbox, that of deflection. He then begins referring to a different report, the interim report, to seek support for his claim.

So I went back to take a look at the interim report and this is what it said;

“As a result, the team was unable to:  (d) implement a complete chain of custody, by the team, for samples from source.” (Section 3.46)

After exposing Lucas’ lies again he went on the defensive….again. Still deflecting from the “final report” that he claimed in his tweet proves him right (which I showed doesn’t) he again refers to the interim report:

But to be complete, you show no comprehension of the Interim Report. Your cherry-picking of 3.46…

All I did was copy and paste directly from the “interim report” but because the report doesn’t say what Scott wants it to say it is my comprehension that is apparently skewed. He then accuses me of “cherry-picking” the section I provided to him. I picked the section that directly relates to the claim he made! Maybe the good professor would have preferred if I had chosen a section that was totally unrelated and let him off the hook?

I then go on to quote relevant sections of the various reports that can be viewed on the YouTube discussion (too long and winded to rehash here) to which Scott responds:

Can you see the pattern? If you prove him wrong by providing evidence he ignores the evidence and attacks the person. And this is an academic! Seeing that he was being boxed in and unable to rebut the facts, he then opts for more deflection again by introducing his own set of questions that are not related to the claim he originally made:

3. Given that, let’s begin with basics. Do you deny that the OPCW took biomedical samples from victims which indicated exposure to sarin (Paragraph 1.6 of Interim Report)?

The exchange goes on like that for some time with deflection and obfuscation in abundance. Scott never did provide me with a shred of evidence that the OPCW claimed anything like he said they did. His tweet was clearly a fabrication of his imagination with the purpose to propagate misinformation.

Given that Lucas refused to provide any evidence of his claim I departed the conversation on YouTube in a manner that would even more-so expose Lucas’ lies on the matter, hence why he seems to have filtered the exchange.

Knowing he wouldn’t let it rest, I was aware he would have taken to Twitter to try and get his last word in. He did try that, however he quickly backtracked when I provided him with further evidence of his lies and misinformation:

In this tweet of the 20 December 2019, Lucas is debating with the UK professors he continually derides. He was asked by Professor Tim Hayward to run a few matters past a toxicologist at his university. Lucas responds by saying the “Toxicologist says you and your mates spout rubbish.”

I found that comment to be derogatory and well outside the vocabulary of an academic exchange, especially one that is being broadcast on social media. But this is yet another example of the calibre of person Lucas is and the lack of professionalism he shows when he finds himself cornered. Cornered, incidentally, by his own lies and fake-facts.

I decided to contact the university to seek out the toxicologists there who he may have referred to as I wanted to know if these persons had said what he claimed they did and had also given Lucas permission to reprint their words. As it turns out the two toxicologists I entered into communications with denied all knowledge of the situation. I explained the reasons why I initiated contact, give them full insight into Lucas’ allegations and thanked them for their time. I also contacted the university to make them aware that he was using the platform afforded to him to attack other professionals.

As soon as Lucas made contact with me today on Twitter and I pointed out that I was pursuing the matter with the university he quickly and silently scuttled back to his safe-place not to utter a single word thereafter.

Here we see Lucas stating, with a degree of certainty, that “Alex” was “not one of the inspectors on the ground at Douma”.

What does legendary reporter Jonathan Steele, the man who interviewed and met with “Alex”, have to say about that?

Steele claims that “Alex” was in Douma and was an investigator. That’s pretty conclusive proof that Lucas is not informed on the subject matter and therefore replaces his ignorance with lies.

The lesson for Professor Lucas in all this is that he would best serve himself and the academic institution he represents if he were to cease propagating fake news and lies. He would also be advised to avoid dragging his work-pals into Twitter spats in which they have not given him their permission to do so. Most of what Lucas spews out on Twitter is propaganda and misinformation. Therefore, dragging his peers into his exchanges is to drag them into his murky world of deceit.

I have only provided a few examples of Scott Lucas’ lies in this article but that should be enough to show the type of character he is. If ever unfortunate enough to find yourself in a debate with him, stick to the facts, don’t deviate and watch as he lobs the insults before running off with his ball.