This report looks at the characteristics of the L2 Douma Crater and compares theto other artillery craters. 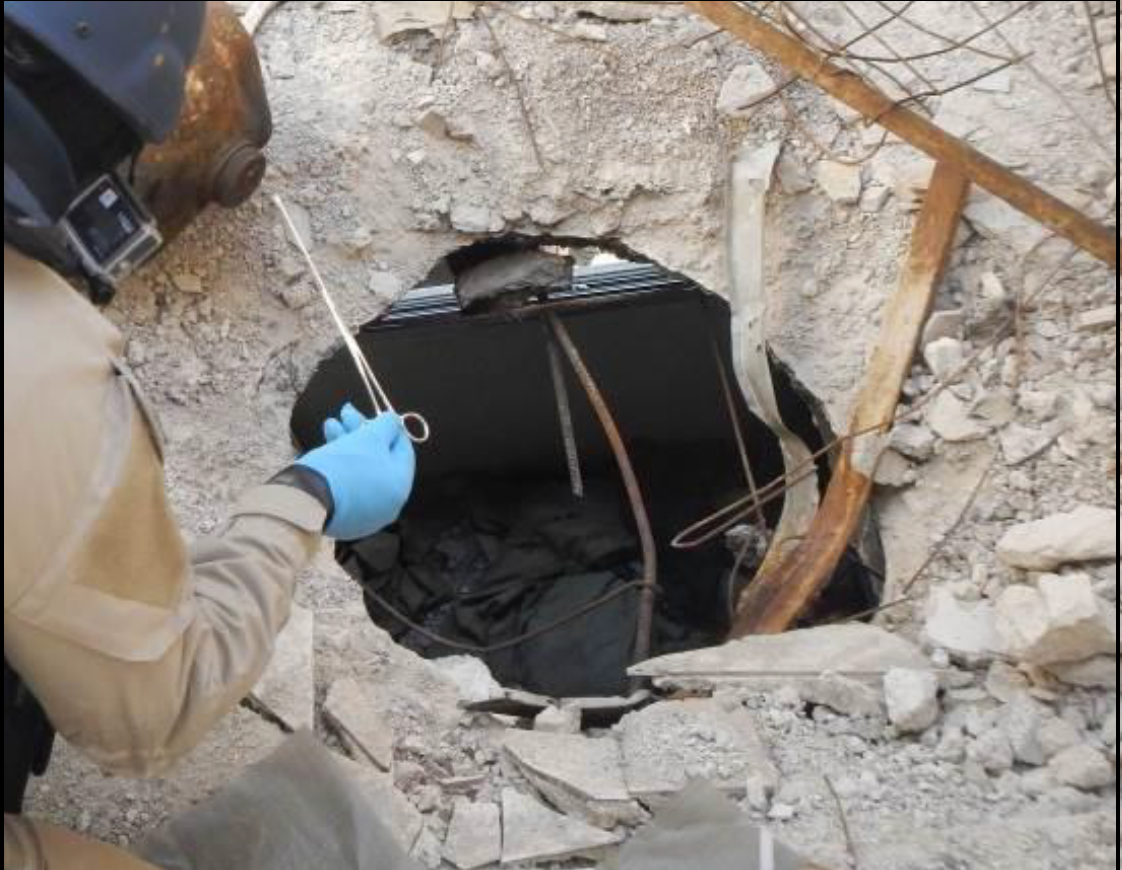 The alleged chlorine attack in Douma of April 7, 2018 is said to have been the result of two air-dropped chlorine cylinders hitting two locations, Location 2 balcony and Location 4 bedroom. In relation to the crater on the balcony (hereafter known as L2) the OPCW-FFM report noted a “similar crater” on the rooftop opposite, yet this crater at no time is alleged to have been caused by a falling gas cylinder.

I began looking at other images of craters posted online from Syria and beyond and compared them against the L2 crater and the one on the opposite rooftop. Given the notable evidence of artillery fire on the balcony and the similarity of both craters I thought my search for like images would be best served by beginning here. I searched for images using the search terms “mortar craters” and “artillery craters” as “falling chlorine cylinder craters” just isn’t a thing in any other country and therefore returns poor results.

In this report I record my search results.

What We Know About The L2 Crater

We know that a gas cylinder was recorded at the location by the White Helmets. We also know that Eliot Higgins, of US State Dept backed Bellingcat, was the first to tweet out an image, that he received from the scene, showing the cylinder on the balcony before he was asked to remove it. A short while after, the White Helmets would tweet a new image showing the cylinder in a different position. I wrote about here.

As a recap. Eliot Higgins tweeted this image from a video he was sent showing a White Helmet operative at the site of L2 in Douma standing over the gas cylinder in question (left image in the tweet).

Here is that image in better quality:

Note the “scorch marks” on the cylinder top pointing towards the crater and the indentation pointing upwards.

Now note the “scorch marks” and “indentation” reversed in the next image as tweeted by the White Helmets. Also note the forward placement of the cylinder into the crater:

Higgins’ apologia for deleting his original tweet is that the man’s legs could have identified him. Had that been a concern you would have imagined that the OSINT sleuth would have considered that before posting it, right? Maybe not.

I will draw your attention to the rusted “wheels” in the photo of the above tweet that’ll you’ll find in the top corner of the image (as denoted by my red square below):

Now look again at Higgins’ deleted image (refer to the following red square to note where the “wheels” were originally placed before the legs left the scene) :

Let’s take Higgins at his word and let’s assume he tweeted the image, realised he’d made a blunder, then deleted it immediately upon recognising his mistake. OK, it happens. But if the deletion wasn’t grounds for suspicion the new tweet from the White Helmets showing staging at the scene certainly is.

Higgins’ tweet was made in the early hours of the morning on April 9, 2018. The White Helmets tweet was published on the evening of the following day.

The Douma-FFM Team, of which Ian Henderson was a sub-team leader at the L2 and L4 locations, recorded a “similar crater” as that witnessed at L2 by the team on an “adjacent roof”.

There has never been a claim that the adjacent crater was caused by a falling gas cylinder and given the similarities of that and the L2 crater I felt it was important to look at what else could have caused them.

Let’s take a look at the image of the L2 crater, and its adjacent look-a-like, and compare and contrast these images with other similar craters.

This is an external view of the crater at L2 from the FFM report.

These are 2 views of the crater on the opposite rooftop.

I’m sure you’ll agree with the FFM that the craters are indeed “similar”? How is it possible that two craters appear on two separate, yet adjacent, rooftops that share the same characteristics yet are caused by two entirely different projectiles? One is allegedly caused by a falling gas cylinder resembling this one:

The other presumably from an artillery or mortar round.

Here is a crater in Ukraine that, according to a report, was caused by either mortar or artillery fire.

Another artillery crater, again in Ukraine.

According to another report this next crater was caused by a rocket fired from Syria again into Turkey:

Here’s a mortar crater from India:

Let’s bring the above craters together to compare with the L2 Douma crater and its adjacent likeness:

Below is an overlaid comparison for the L2 crater with one from Ukraine.

Moving on to look at the inside-out view of the L2 crater I again compare this view with other internal views from like craters caused from artillery fire.

Ian Henderson, OPCW-FFM Inspector for Douma, in his engineering report into the L2 crater said:

Experts were consulted to assess the appearance of the crater observed at L2, particular the underside. The expert view was that it was more consistent with that expected as a result of blast/energetics (for example from a HE mortar or rocket artillery round) rather than a result of impact from the falling object. This was also borne out by the observation of deformed rebar splayed out at the underside of the crater, which was not explained by the apparent non-penetration and minimal damage of the cylinder.

Emphasis mine – Link to Henderson’s report

Henderson touches on, for me, one of the most vital pieces of evidence on the L2 crater that is pretty much ignored. The “splayed rebar”.

For rebar to be broken in such a manner would have required an object to have impacted it and then continued on its path causing splaying. But we know this isn’t the charge for the gas cylinder. We know the charge is that the gas cylinder first hit the corner of the building (this claim was made by Bellingcat), it is then alleged to have landed on some wire mesh adjacent to the corner of the rooftop before falling a few feet on to the balcony causing a crater larger than its diameter but without falling through it. The cylinder had the fortune of coming to rest on two carefully placed pieces of metal.

The Evidence L2 Crater Was Caused By Artillery

So, leaving aside the comparison images I lay out above showing the major similarities between the L2 crater and other artillery craters, let’s take a look at the evidence from the scene.

Various chlorinated organic chemicals were found in samples from Locations 2 and 4, along with explosive residue.

The FFM team notes “explosive residue” at the site of the L2 crater. This could not have came from the yellow case cylinder as there is no evidence to support that idea and besides, it has never been alleged by supporters of the falling cylinder theory. So if it didn’t come from the cylinder then how else did it get there?

Here is footage I got from RT.com showing the balcony. I will draw your attention to the scorch damage to the surrounding walls along with the explosive fragmentation patterns.

I took this image from a Human Rights Watch report into Israeli attacks on Gaza from 2006 to show what artillery fragmentation may look like on a concrete wall.

Again we see glaring similarities with the impact marks on the walls surrounding L2.

The evidence that a chlorine cylinder was air-dropped and hit the balcony at L2 is scant and what does exist requires heavy sessions of mental gymnastics to make it fit the facts. On the other hand, evidence the crater was caused by an artillery round is strong and supported by an adjacent crater that is similar in both appearance and dimensions, the fragmentation marks and scorch marks on the surrounding walls and the finding of explosive residue by the FFM. If you add this to oversized crater, the deleted tweets, the manipulation of the cylinder and scene, along with Ian Henderon’s engineering report, it’s quite easy to conclude the scene was staged and the cylinder manually placed.

In this inverted world we live in today, pointing out such staging is frowned upon and earns one the title of “Chemical Weapons Truther” or “War-crimes Denier”. Bizarrely, those who opt to believe the ludicrous claim of a falling chlorine cylinder, a claim that isn’t supported by the body of evidence, a claim that was made and pushed by Jihadists, and a claim that the Douma FFM team felt wasn’t supported by the facts, they are deemed people of sound mind and rational beliefs.

Douma L2 crater was clearly staged, we have the evidence of that in the Higgins deleted tweet. The body of evidence points to the crater being the result of previous mortar/artillery fire.