The Douma Deception – Was The Damage To The Roof Caused Prior to April 2018?

Was the damage to the building above the crater at Douma caused prior to the alleged attack of April 7, 2018? I investigate. 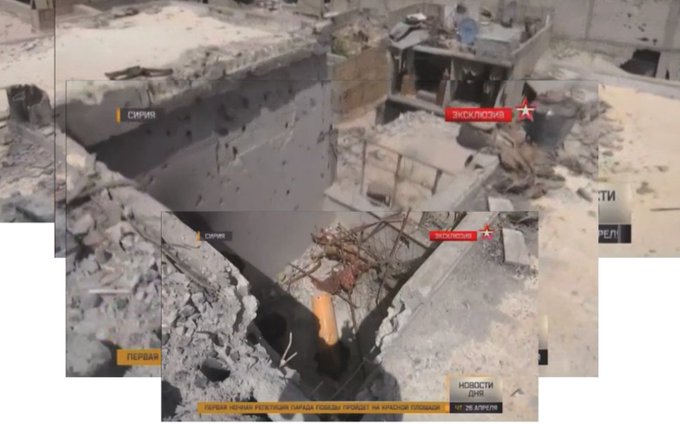 In this report I will look at the damage that was allegedly caused to the building above the crater at Location 2 in Douma as a result of the alleged chlorine cylinder hitting it.

The allegation is, that the cylinder, before hitting the balcony and puncturing the reinforced concrete ceiling, first hit the corner of the roof above thus causing the damage noted by this red circle:

In this report I use historical imagery from Google Earth and sourced imagery from a commercial satellite company that has been provided to me.

I compare the images to see if there is evidence the damage to the roof was there prior to April 2018 or if it was caused at that time.

Here is an excellent ‘collage’ of pictures that Michael brought together to form an overview from the roof above the crater at L2.

I will first focus on the damage to the corner of the roof above the crater (denoted by blue square). Here is satellite imagery from Google Earth showing a sky vantage point of the building and location of the damage. The blue dot points to the damaged corner in question.

The next historical snapshot from Google Earth of the area is from March 27, 2018.

Can you note the black shadowing, as pointed to with the blue arrow? Here is a close-up:

Just looks blurry to me, you may say? I agree. Bear with me. The next step-back is March 01, 2018. Again note the blackened area?

For a period prior to the 1st March, images are pretty poor and blotchy so the next reasonable snapshot comes from May 06, 2017:

Again note the blackening? The point of this exercise is to show that the darkening isn’t simply the shadow of a nearby building or object as it appears on different days and from different satellite angles.

But now I’d like to take it a step further and show you, what appears to be, historical blast damage to the rooftop.

Here are two images showing the same damage to the rooftop in March 2018 and May 2017 :

I could go further back but the point is to show, that what seems to be, blast damage to the roof existed long before the alleged chlorine attack of April 7, 2018. A fair presumption would be that this is blast damage from artillery or mortar fire.

As stated above, I received imagery from a commercial provider for the months preceding April 2018 and I compared the images to that of Google Earth. Here’s an one for January 8, 2018:

You can again see the blackened area of the corner of the building and the other denotations of blast damage witnessed in the Google imagery.

But now let’s zoom in on the darkened area, depicted throughout this report by the blue arrows.

At first glance you would be forgiven for dismissing this image as poor quality, and whilst it appears so, it offers us fantastic detail of the damage caused to the rooftop. Note the areas I previously pointed to as historical damage and see how clear they now appear in this pixelated imagery. Note as well how defined the damage is to the corner of the building above the crater (blue arrow).

Now it begins to get interesting. Here is imagery from March 01, 2018:

Here it is again without my denotations:

And again, only this time as a close-up:

Next up is imagery from March 4, 2018. Again it’s badly pixelated but again that works to show shadowing much better.

Next is imagery from March 12, 2018. This one shows the edge of the building more clearly and one can now see, what would appear to be, the damage we see in the FFM final report.

Here it is again, zoomed in:

This image is from March 25, 2017 and again appears to show the damage to the edge of the building along with the previous mentioned historical blast damage to the surrounding areas:

Which brings me to my last image of before the alleged attack on April 7, 2018.

In-so-far as a conclusion can be reached, using such imagery and OSINT gathering, I believe I have provided quite strong grounds for concluding the damage to the corner of the rooftop above the L2 crater existed before the alleged event is claimed to have occurred.

That being the case, the official narrative would take a decisive blow beyond that of what we’ve seen to date by any of the leaks or testimony. For the final FFM report, written by the Turkish “Core Team”, not the Douma inspectors, places quite a lot of weight on the cylinder having hit the edge of this building for it to have been able to continue on to then create the crater on the balcony, without fully penetrating the ceiling.

Observing the damage on the roof above the crater, the experts were able to provide an explanation of the cylinder not penetrating completely through the aperture.

That statement in itself tells you the weight placed on the idea of the cylinder hitting the edge of the building. But the report went further and added this probability into their modelling:

Again we see the FFM employed experts modelled the damage to the cylinder with hitting the building first.

So if the cylinder didn’t hit the building then the OPCW modelling and explanation is incorrect and if that is the case – well, I’ll let you work the rest out for yourselves.

What of the historical blast damage to the roof I mentioned throughout the report? Can it be linked to the damage noted of the edge of the building?

You will note blast fragmentation marks on the inside of the wall that was allegedly damaged by the falling cylinder. The damaged corner can be seen to the left the image.

Then there’s the almost identical crater on the the roof of the opposite building:

And it all adds up to historical mortar/artillery damage.

I am seeking further high resolution imagery and awaiting the source getting back to me. The imagery was provided free of charge and thus no fundraiser was required. It seems that there are a lot of people out there that want an independent inquiry into this event as they don’t believe what they are being told.

I am grateful for this source providing the help they did and on behalf of the victims who were killed on that fateful day I believe all truth-seekers should throw their weight behind calling for an independent enquiry.

2 thoughts on “The Douma Deception – Was The Damage To The Roof Caused Prior to April 2018?”