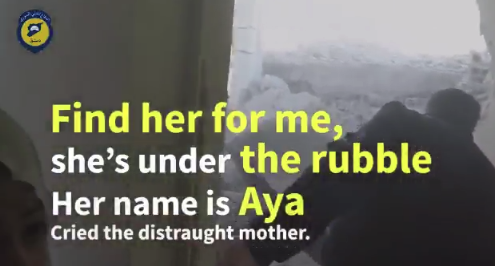 On the 15th October 2019 I lodged a complaint to the BBC into their coverage of the staged “child rescue” carried out by the “WhiteHelmets” in Damascus in 2017.

The BBC claimed the video showed a “girl rescue”.

Activists have reported air strikes in two other neighbourhoods, Qabun and Barzeh, over the weekend.

Having investigated the matter thoroughly and sought expert audio forensic analysis of the video of the “rescue” all the evidence pointed to the “rescue” being staged using either a dead child or “Simbody” doll (more on this later).

The date of my first report into the incident was the 27 August, 2019. In that report the video of the “rescue” contained audio of a baby crying that myself and others believed didn’t fit the video. This lead me to seek the assistance of an audio forensics lab to see if the audio of baby crying belonged to the video.

In their provisional report to me they concluded the audio had been added after the video was shot. As expected, this took some time to complete so my follow-up report was published on September 30, 2019.

After seeking further clarity on the audio forensics I then lodged my complaint to the BBC on October 15, 2019 – 2 weeks after my second report was released.

The First Stage of the Complaint

Here is the text of my original complaint:

You will note that in my investigations I draw attention to oddities such as a baby crying under rubble, no facial movement or expressions as stones hit her face and not a single attempt to clear her airways during the whole ordeal.

I also draw attention to carefully choreographed scenes from the “White Helmet” rescuers who at times seem more interested in getting a proper camera shooting angle than they do in rescuing the child. I do not doubt that children are suffering horrors in Syria, day and daily, that is unimaginable to us in the free west and these events *must* be highlighted to a global audience regardless of who’s to blame. But when respectable institutions like the BBC give oxygen to staged “child rescues” it lessens the validity of their reporting on real child rescue events.

How this made it past the fact-checkers and due-diligence departments of the BBC is a mystery and can only suggest a rush to ‘go to press’ was the driving force herein. I ask that you carefully review my findings with the aim of setting the record straight on this “rescue” and help bring justice to that little girl whom it seems is not of the living world.

To this end, I would invite you to seek a forensic sound analysis and/or a pathology analysis on the girl’s likely condition to aid in the investigation. I’m currently running a crowdfunding event to try and raise money for a full forensic analysis but would welcome the BBC taking the initiative and having one carried out themselves with the view to retrospectively applying due diligence to their reportage of this event.

Thank you for contacting us.

I am replying to your recent complaint on behalf of the BBC Complaints team to state a missing requirement.

In this case, I regret we’re unable to proceed further with your complaint with the existing information which was submitted as the BBC can only investigate complaints of BBC output that was broadcast or published within the past 30 days.

As this particular article/video, titled ‘Syria crisis: Footage shows girl ‘Aya’ rescue’ was published on 20 February 2017, this does not meet the BBC Complaints Framework requirements.

The BBC’s Complaint’s Framework sets out which details the BBC needs in order to be able to look into an editorial complaint, and the full Framework can be found by following this link:

Once again, thank you for taking the time to get in touch with us.

The Second Stage of the Complaint

I wrote back to the BBC, this time escalating the complaint to a manager. I asked that they review their decision as I felt the points I raised were simply ignored based upon the ’30 day’ rule.

(I will include my full second stage email to them when I have my backup server up and running again).

Thank you for getting in touch again the BBC News website.

The BBC’s Complaints Framework sets out that:

You should make your complaint within 30 working days of the date on which the content was broadcast or published (e.g. on a BBC website or on a BBC social media site). If you contact the BBC after that time, please explain why your complaint is late. Exceptionally, the BBC may still consider your complaint, but only if it decides there was a good reason for the delay.

I appreciate that you have contacted us again to explain that these matters first came to your attention this year, but I do not agree that is a compelling reason for us to exceptionally consider your complaint.

Notwithstanding that note your blog was published on the 27th August, whereas your complaint was submitted on October 15th, at this stage over two and a half years have passed since the article was first published.

I appreciate that you consider your efforts to amount to an in-depth investigation, but it would appear to consist almost entirely of your opinion on what the video shows, with no evidence to back those specific claims.

Opinions do vary widely about the BBC and its output, but this does not necessarily imply there has been a breach of standards or of the BBC’s public service obligations. For this reason we regret we don’t have more to add to our previous correspondence, and so will not respond further or address more questions or points.

If you are dissatisfied with this decision you may ask the BBC’s Executive Complaints Unit (ECU) to review it. Details of the BBC complaints process are available at http://www.bbc.co.uk/complaints/handle-complaint/ where you can read the BBC’s full complaints framework.

You should contact the ECU within 20 working days of receiving this reply. You will need to explain why you believe there may have been a potential breach of standards or other significant issue for it to investigate.
You can email ecu@bbc.co.uk, or write to:

Executive Complaints Unit,
BBC,
Broadcast Centre,
London W12 7TQ.
Please include the case reference number we have provided above in this reply.

A Look at the BBC Second Response

I appreciate that you have contacted us again to explain that these matters first came to your attention this year, but I do not agree that is a compelling reason for us to exceptionally consider your complaint.

This seems to be saying that even if you find a questionable story on the BBC website, long after it was published, there is nothing the BBC are prepared to do about it. That it shall remain live and presented as factual reportage.

Notwithstanding that note your blog was published on the 27th August, whereas your complaint was submitted on October 15th, at this stage over two and a half years have passed since the article was first published.

Here the BBC begins to get confused. The original report was published on my blog on the 27th August 2019 with the follow-up report posted on the 30th September 2019 (as shown above). Therefore, my complaint was lodged roughly 2 weeks after the publishing on my second report and only after I had sought further clarity from the audio forensics experts.

I appreciate that you consider your efforts to amount to an in-depth investigation, but it would appear to consist almost entirely of your opinion on what the video shows, with no evidence to back those specific claims.

The BBC selectively ignores the forensic analysis and suggests that it’s all only my opinion. They ignore that I welcomed them to take my concerns onboard and to have their own audio analysis carried out to compare against the analysis I had carried out. They ignored every point that I raised about the video analysis. Apparently it’s only my opinion that a child can be totally submerged in debris yet still cry without any attempt at clearing its airways when its face is uncovered.

Opinions do vary widely about the BBC and its output, but this does not necessarily imply there has been a breach of standards or of the BBC’s public service obligations.

What has this got to do with with my complaint? It sounds more like there’s some apologising going on here for the BBC being caught carrying a fake “child rescue”.

For this reason we regret we don’t have more to add to our previous correspondence, and so will not respond further or address more questions or points.

For what reason, exactly, will there be ‘no further response to my questions’? Because of a point that I didn’t even raise in my complaint?

If you are dissatisfied with this decision you may ask the BBC’s Executive Complaints Unit (ECU) to review it.

It’s off to the Executive Complaints Unit, I guess.

I raised several points in my complaint to the BBC. One of those points was in relation to the crying in the video.

Here is that video of the “rescue” that is at the centre of the complaint:

Even whilst the rescuers are digging at the spot the face would soon appear at we hear crying yet when the face is uncovered there is no coughing, gasping for breath or facial expressions. No clearing of the airways.

Take a listen to the sound on this short clip. Right at the beginning, around 2 seconds in listen for a clipping of the crying sound. The same clipping is heard at 16 seconds. This is the result of the audio editing being poorly carried out I am informed.

Here is a much slowed down video showing the uncovering of the “child”. I slowed it down so that you can watch in slow motion as rocks hit the face and land in the mouth, along with with an abundance of dust all over the face yet we see no expressions on the face, no coughing to clear the airways or no opening or closing of the eyelids to clear any obstructions.

Here is my first report into the incident on the 27 August 2019.

Here is the follow-up report, dated 30 September 2019, with the forensic analysis.

To conclude that there is no case to be investigated in my complaint is to either be in denial or to be covering-up. To hide behind the ’30 day rule’ is ludicrous and does the BBC’s argument no justice.

I will continue with the complaint process as far as I can go, if even to highlight the extent at which the BBC seems prepared to go to cover-up for the fact that it took, verbatim, a claim made by a belligerent in the Syrian war, without fact checking, and regurgitated it.

If you can watch the videos I posted above and read my reports and come away believing the event was genuine and that it’s just my opinion it was staged then I’d welcome your arguments in helping me see where or what it is that I am getting wrong.

I am working on a report at the minute on “Simbodies” which are life-like dolls used to train rescuers and “first responders” in emergency situations. I have uncovered a direct link between a manufacturer of these dolls and the Syrian White Helmets. This will tie into the Baby Aya story as I’ll be asking if ‘she’ is a dead child or a doll.