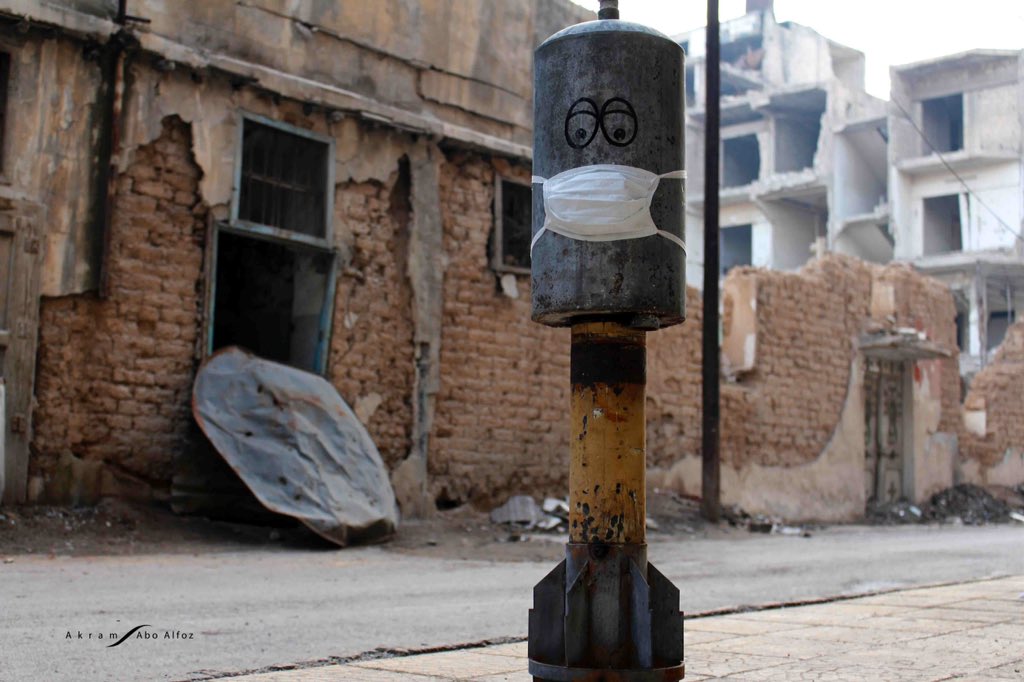 Since January 2017 there were claims from Syria’s opposition in Ghouta that the Syrian military were using modified 107mm IRAMs as “chlorine rockets”.

These claims were picked up and amplified by the US-NED funded Bellingcat and then onwards to the western media. It then became an accepted fact that Syria’s Assad was using these “chlorine rockets” and that only his military had access to them.

In previous reports I investigated claims of these “chlorine rockets” being used in Douma and showed proof of rebel staging:

In this investigation I will show you proof that these “chlorine rockets” were also being manufactured in Douma at the same time the rebels were claiming to be under attack from them.

So what is an IRAM? The recognised definition is an “Improvised Rocket Assisted Munition”.

Here is a breakdown of the components of the rocket:

Modifications to this munition consist of changing the warhead from an explosive warhead to that of a gas cylinder and adding a tail section.

What does a ‘chemically modified’ 107mm IRAM look like? Here is the infamous “rooftop cylinder” that I previously wrote about here and here.

What is alleged to have occurred above is the HE warhead has been replaced with a gas cylinder able to carry a chlorine payload, with two “threaded ports” added on the aft of the warhead allegedly to act “release valves” for the gas.

Here is the “High Explosive (HE)” IRAM:

On January 30, 2018 a Syrian artist released images of such a “chlorine rocket” that he had decorated. The idea was to highlight to the world, via art, what the residents of Douma were going through by being attacked by these munitions.

He took “One of the missiles”, drew eyes onto it and added a face mask then took pictures of children standing alongside it. Nothing wrong with the idea he had in mind especially as the image worked and was circulated far and wide.

The artist’s name is Akram Abo Alfoz and here is his tweet:

You will note he makes mention of the “missile” having been used “in the city of Douma….a few days ago”. The date of his tweet was January 30, 2018. On January 22, 2018 it was alleged that the Syrian military launched a chlorine attack in Douma.

Seeking further clarification this was the event he was referring to I did a reverse image search to see what other sources were using his pictures and what they were saying.

I came across a joint investigation by “Syrians for Truth and Justice” and Bellingcat and found the image confirming it was “One of the munitions used in the 22nd January attack”:

What jumps out at me immediately is the freshly galvanised gas cylinder and tail section along with the apparently new looking valve. When you then look at the rocket motor you can see signs it has been used previously and it doesn’t fit with its new looking additions. Add to that, there are no visible signs this “missile” has been fired and hit the ground.

Having spent a considerable amount of time investigating the alleged January 22 attack I don’t recall having seen either the rocket motor, cylinder head, valve or tail section in any of the evidence I had gathered. So I decided to look again.

Here is an image of the alleged remains of the “missiles” used on that day.

And from a different angle:

I firstly draw your attention to the tail sections:

Now look at the tail section from the artist’s image:

Can you see *any* similarities in terms of its condition with that of the aforementioned tail sections?

What about if I told you it had entirely different fins from that of the others?

I draw your attention to the ‘cut-outs’ as denoted by the yellow marks. These don’t exist on the fins of those that were provided as proof of the alleged event. Isn’t that odd?

Coupled with it’s freshly galvanised appearance and lack of any damage, I believe it’s safe to conclude this tail section hasn’t been used before and isn’t the same as those that were provided as proof of the event in question.

The only other occurrence I can find of this ‘cut-out’ design of the fins is in the alleged chlorine attack a year before on January 30, 2017 using the same cylinders.

This allegedly occurred in Marj al-Sultan which is also in Ghouta.

What about the cylinder heads? Does they bear any resemblance to the cylinders used in the alleged attack?

Neither do I. Outside of the very obvious reasons here are some more detailed. The Left cylinder has no base plate. The artist one clearly does (yellow):

Of course, the elephant in the room is the freshly galvanised body of the cylinder and lack of any damage which, in itself, proves it hasn’t been used before and thus isn’t shown on the January 22 evidence pictures.

None of the evidence I have been able to find of the alleged January 22, 2018 chlorine attack shows any sign of a valve, let alone a valve appearing in relatively new-like condition.

This same type of valve was also alleged to have been used in previous chlorine attacks and, yet to happen, alleged attacks.

I have looked at every available image of the alleged evidence, specifically the rocket motors, and in my view none of them shows the same damage pattern as can be seen on the artist’s example.

Here are the motors allegedly used that day:

I believe I have shown solid evidence that the freshly galvanised components of the artist’s impression are not from the January 22, 2018 alleged attack. Neither are they from any other alleged attack using these “chlorine rockets” as found in Ghouta.

The fact they are presented in like-new condition therefore points to the Syrian opposition having an ability to manufacture all the components bar the rocket motors hence why we see previously used motors being reused in the attacks alleged by the opposition.

An example of that claim is provided for your information.

In this image you see the tail section in the proper location at the end of the rocket motor. You will, however, note the scraping marks denoted in the blue circle. For those of us that have spent time investigating these alleged attacks we have learned that the marks on the 107mm rocket bodies are caused by the tail section shunting forward along the rocket motor upon impact. This is possible because the tail section is only superficially secured to the motor body by nuts and bolts.

When we see this type of marking on an example with the tail section in place then it points strongly to the motor having been previously used and has now been recycled.

Given that Ghouta fell to the rebels in 2012 and this attack is alleged to have occurred in 2018, it is unlikely the new components would have been captured from Syrian stores. Though, even if we entertain this theory then we still have evidence the opposition were in possession of newly galvanised cylinders. The claim has always been they don’t have access to this type.

Previously, I also uncovered evidence the opposition have been using this same type of rocket in Idlib, even up to this year. Strangely, the Douma rebels relocated to Idlib after leaving Douma. Before their arrival there has never been a claim, to my knowledge, these “chlorine rockets” had been used there.

It is therefore hard not to conclude that the Syrian opposition had the ability to manufacture the same chlorine cylinders, valves and similar tail sections of the “missiles” they claimed were fired at them in Douma.