I investigate the claims made by the IICISyria that “chlorine rockets” were used in Douma in early 2018. 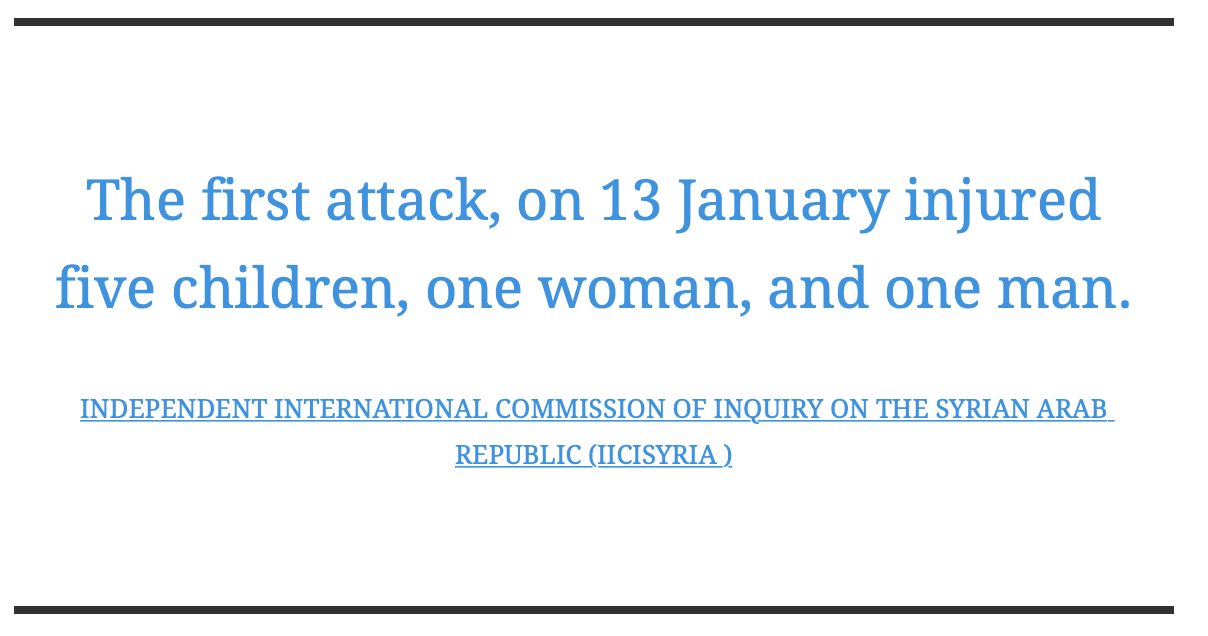 Writes the New York Times descriptively in an article of June 20, 2018.

These details and others blaming Syria for atrocities in eastern Ghouta, a suburb of Damascus, were uncovered by a United Nations commission investigating and documenting possible war crimes in the seven-year-old conflict. But when the commission issued a report on Wednesday, the details were omitted.

The NYT goes on:

A member of the commission explained the omissions, saying that many of the details in the early draft needed additional corroboration or clarification and might be included in another report, perhaps by September. There was no outside pressure to withhold the information, said the member, Hanny Megally, an Egyptian human rights lawyer. (Emphasis mine)

In meticulous detail, the draft enumerated six chemical weapons assaults on civilians from January through April 7… In attacks on Jan. 13, Jan. 22 and Feb. 1, the draft said, government forces fired chemical agents, “most probably chlorine,” into a residential part of eastern Ghouta’s Douma neighborhood, near a sports stadium, roughly 800 yards from the front lines, between 5 a.m. and 6:30 a.m.

Some witnesses described a “slow-acting agent” that smelled like chlorine, the draft said, and they had sufficient time “to rouse the victims, obtain wet cloths to serve as makeshift face masks, and evacuate the affected areas.”

What evidence exists of a chlorine attack on January 13, 2018?

That’s it. That’s all I could I find anywhere on an alleged attack on that date. So what does this “Independent International Commission of Inquiry” report say of January 13?

Can that claim be substantiated? All claims of chlorine attacks in Douma end up back at the door of Bellingcat and “STJ – Syrians For truth and Justice”. They worked closely with Eliot Higgins on the claims even teaming up for joint reports.

“The attack took place at about 6:00 a.m. on Saturday, 13 January, 2018, specifically between Duma and Harasta, but it was closer to Harasta than to Duma. However, the opposite direction of the wind led the poisonous gases to large areas in Duma, as many locals reported. About half an hour after the sunrise, the scent began to fade gradually, but there had been seven civilians injured as a result of this gas;

Next up is a second witness testimony to STJ:

Indeed at 6:00 a.m. I heard the sound of several rockets that landed near the outskirts of the city, and about half an hour later, I began to feel a strange smell spread strongly in the air.

Note how specific both men are about the time being 6am and especially the “half an hour” claim?

Then we have another alleged witness by the name of Mohammed al-Shami, whom STJ describe as “a combatant”. STJ earlier noted that “The rockets landed behind the positions of Ahrar al-Sham..”.

“Saturday morning, at 5:30 a.m. the area between both Harasta and Duma was targeted by missiles carrying chemical warheads. The target was closer to Harasta..

Now we begin to clearly see striking specifics being shared by, what is alleged, are independent witnesses.

Majid Al-Khenshur – “between Duma and Harasta, but it was closer to Harasta than to Duma.”

“However, the opposite direction of the wind led the poisonous gases to large areas in Duma”

Mohammed al-Shami – “between both Harasta and Duma..The target was closer to Harasta.

“and the wind was in the opposite direction of the presence of regime fighters so that poisonous gases would not affect them. These gases reached Duma”

But what of the victims? Recall what the IICISyria said:

“five children, one woman, and one man.”

consequently six civilians were injured because of these gases, including 5 women and 2 children.”

“5 women and 2 children” = “six civilians” according to both Mohammed and STJ.

Now compare that to the IICISyria claim of; “five children (not 2)” and “one woman (not 5) and you begin to see how fraudulent this whole thing is.

but there had been seven civilians injured as a result of this gas;

For its part, the Health Directorate in Damascus and its countryside stated on January13, 2018 that, at 6:00 on Saturday, it received six cases, including five women and one child,

So let me bring this all together for you.

Lastly, the STJ report provides a link to a video that it claims:

On Saturday, January 31, 2018, Damascus Countryside Specialty Hospital published a video footage showing receiving seven cases of suffocation, including six women and a child as a result of inhaling poisonous gas, likely to be chlorine gas.

The video shows a single child. A boy.

Of the rockets the Ahrar al-Sham fighter says this:

“Through the nature of firing the rockets, their sound in the air and the way they explode, we found that these rockets are Katyusha Rockets notably those ground-to-ground missiles..”

Taking these “chlorine rockets” at face value they would not explode. They can’t. They would have no explosive charge. The primitive idea behind them is that they must land nose first to break off a valve at the nose so that chlorine could be released.

So these were neither “Katyusha rockets” nor ‘explosive’.

Conclusion on the 13 January 2018 Allegation

This was a non-event. If using an evidence based approach – this event didn’t happen. Simply put, we have no physical evidence of an attack having taken place and the claims of victims speak for themselves.

Yet according to the NYT this was one of “six chemical weapons assaults on civilians from January through April 7… In attacks on Jan. 13, Jan. 22 and Feb. 1..”

The Times went on to claim that this incident was ‘meticulously detailed’ yet left out of the final UN Commission’s report.

I spoke with a well placed source on this matter who informed me that it wasn’t left out pending anything further but was left out because “it was a big fat nothing”. I agree and I believe the evidence I have presented here supports that conclusion. But what this does do is highlight the role of the corporate media in shaping opinions and managing narratives on the many Syrian chemical claims.

This NYT article was written by Rick Gladstone and Maggie Haberman. Maggie has 1.2 million “followers” on Twitter and Rick, almost 9k. So this story travelled far and wide [I reached out to both Maggie and Rick for comment but at the time of writing they have not responded], and amongst the disseminators of this fake information were three familiar faces, Brian Whitaker, Gregory Koblentz and Kareem Shaheen:

I do wonder how much of this stuff these people actually investigate and how much they just parrot into each other’s ears. From an OSINT perspective it’s embarrassing to watch. It’s actually fraudulent behaviour by the perpetuance of false information.

“Bottom line: Someone on the @UNCoISyria didn’t want Iran implicated in Syrian chemical attacks.” – Laments Koblentz before appealing to the FFM. Gregory has obviously never spent 10 minutes analysing these claims and is working to an entirely different agenda altogether.

I have done extensive work on these “Chlorine IRAMs” of Higgins’ and shown them to all to be staged events.

In this new series of reports I will bring together old and new evidence to conclusively prove these “rockets” are nothing more than props and the events staged.

This concludes the evidence, and lack there-of, relating to the 13 January 2018 alleged chlorine attack in Douma.