The Douma chlorine event of April 7, 2018 gave us a cylinder that defied aerodynamics and ended up resting on a bed. How did that happen? Was it staged? 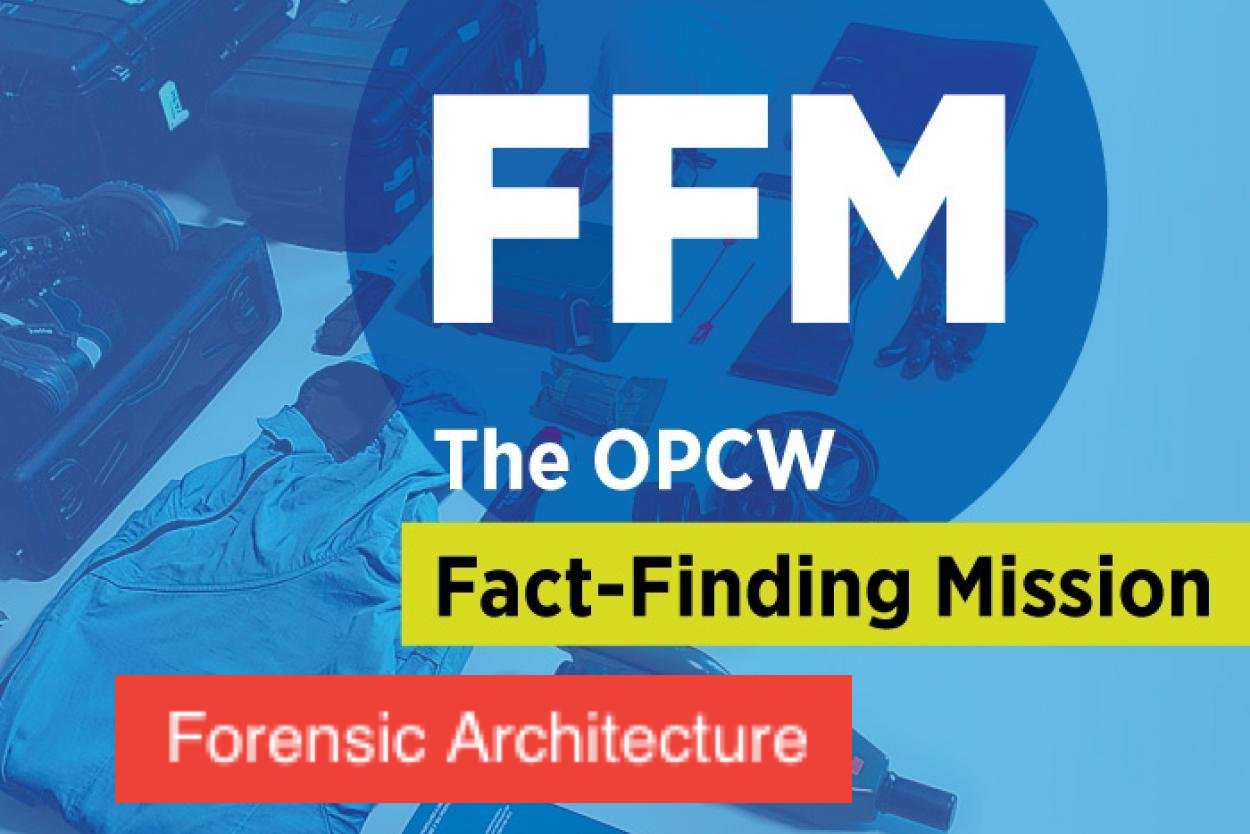 There is a lot of debate and theories circulating on the 2 infamous cylinders that are alleged to have delivered chlorine to Douma on that fateful day in 2018. Scepticism of the official narrative has been fuelled in recent times by the leaking of information from within the World’s chemical watchdog organisation, the OPCW. I won’t spend the time here to go back over the claims and counterclaims as I’m sure most of you reading this will beware of the story.

In this first part of a two-part report, I will briefly highlight some discrepancies and oddities I have come across during my investigations on Location 4, aka ‘The Bed Cylinder’ location.

According to the OPCW they “concluded” the cylinder at this location penetrated the reinforced concrete ceiling side on, or, “Parallel to the ground”. Upon impact it smashed through the ceiling, splitting the rebar when it hit the floor and continued on its journey when it bounced off the floor to land on a nearby bed in exactly the same orientation as it smashed through the ceiling and hit the floor at. In ‘concluding’ this scenario the OPCW therefore “concluded” the cylinder was air-dropped and given that only the Syrian and Russian armies have an airforce in the country the finger of blame was pointed in their direction, but specifically towards the Syrians.

But does the narrative add up? I take a look at the specific claims and compare them to the evidence. I also take a look at the conclusions reached in the Forensic Architecture investigation and see how they hold up against the OPCW report.

Here is a depiction of the roof crater:

Next is a 3-D image of the cylinder overlaid onto a photograph of the roof. You should see what is being claimed by the OPCW. The cylinder smashed through the roof, side-on, whilst breaking the steel rebar reinforcement.

Below is a quote from the OPCW report:

Considering the proximity of the water tank, the neighbouring buildings, and the surrounding wall adjacent to the hole in the roof, it was concluded that the cylinder impacted the roof as shown in Figure A.7.6. From the shape of the crater and damage on the cylinder, it is likely that the cylinder landed parallel to the ground creating a crater with dimensions of approximately 166 x 105 cm, which is in keeping with the dimensions of cylinder of 140 x 35 cm.

Next is a second image from the OPCW report depicting a diagram of the inside of the room where it is claimed the cylinder fell into before bouncing onto the adjacent bed.

The yellow cylinder crashes through the ceiling (top right) and hits the concrete floor (1) then follows the trajectory of the blue arrow before landing on the bed orientated in the same way as it was when it hit the floor.

This is a helpful image to show what it is the OPCW is ‘presuming’:

The Cylinder on the Bed

Now the cylinder finishes its journey and comes to rest on the bed. Here you will the metal harness surrounding the cylinder that upon closer inspection will tell us a few other things:

The idea of the wheels in the past was to assist the soldiers as they pushed “barrel bombs” from the rear of helicopters, as can be seen in the next image:

The purpose of “suspension lugs” are to ‘suspend’ armaments on the exterior of an aircraft.

I would draw your attention to the orientation of the “suspension lugs” on the bed cylinder and ask that you note they run longitudinally on the cylinder. That helicopter in the above image is known as a “Hip” or a Mi-17 helicopter. That’s an important detail because it is alleged these cylinders were dropped from “two Hip helicopters”:

If that’s the case, and given the weapon girders on the Mi-17 require suspension lugs that run at 180º of the weapon, then we must ask why the Syrian military went to all that trouble of making a harness with incorrectly orientated suspension lugs?

With those ruled out as a possible loading mechanism on these helicopters then the only other possibility is that like the image above of the “barrel bomb”, this cylinder was pushed from the back of a helicopter.

You will also note something else of interest on this harness; it has tail fins the purpose of which is to help guide and orientate a projectile downwards or nose-first. Here is what Global Security says about them:

Bombs are stabilized in flight by either fin or parachute assemblies. These assemblies attach to the rear section of the bomb and keep the bomb nose-down during its descent.

We can see from the bed cylinder that the harness and fins are still attached to the device therefore we must ask how the cylinder managed to hit the rooftop side on?

Watch this short, but excellent, video showing how “barrel bombs”, when thrown from a helicopter, soon stabilise and orientate themselves downwards thanks to the tail fins:

Logically we must then ask what happened at Location 4 that the laws of aerodynamics were suspended on that night?

Here is a good quote on the purpose of tail sections from Wikipedia:

It is claimed the cylinder at Location 2 hit the corner of a building almost perfectly nose-first and it is alleged to have also been fitted with the same harness that included tail-fins.

In their investigation into the Douma event FA concluded the cylinder at “Location 4” must have been manually placed (as was suggested by the OPCW-FFM ballistics expert Ian Henderson whose report was suppressed). They also concluded that the white substance on the bed cylinder, that looks like dust, was in fact “frosting”. They are very clear about that. They go as far as to say that it’s even on the harness too. They say this was because “the canister has undergone rapid decompression”.

Oddly, Forensic Architecture seem to be the only group suggesting this from what I can gather. The consensus seems to be that it’s dust.

Indeed, it seems to have escaped the group that the bed clothes and wooden bedside table also have this ‘”frosting”, in fact as does the entire room and everything in it!

Here they are in their own words:

Here’s what the OPCW says of this ‘frost’:

The cylinder appears to have been cleaned. The layer of a white powder seen in the videos was not present when the FFM team visited the location.

I also find this “white powder” claim to be strange in itself but had it been “frosting” from decompression it’s a safe bet they would have made a note of this and certainly not mistaken it for “powder”. So what was this powder, if not dust? And given it appeared on the cylinder whilst it was under the control of the rebels then why wasn’t this question explored by the OPCW?

But Forensic Architecture didn’t stop there. They went on to claim that the sound of this decompression could be heard:

The most obvious thing I noticed was that what sounded like hissing only became audible, and certainly got louder, the further away from the cylinder the cameraman walked. The cameraman went right up next to the cylinder valve and little could be heard yet the further away he walked and the closer to the window he got the clearer the sound became. Forensic Architecture is asking that you believe them, not your own hearing and that you believe them and not your own eyes. They offer a technical approach to inverting reality, by way of 3D modelling. The media don’t challenge their ridiculous conclusions.

There can be little doubt that the official narrative on the bedroom cylinder and the facts as presented don’t add up. There seems to have been a case of the OPCW trying to make the evidence fit the crime rather than asking if the evidence does indeed fit. In fact this schematic from their own report proves that to be the case as they begin to ‘presume’ stuff:

The FFM team that was on the ground in Douma did indeed ask these questions and all but one agreed the evidence didn’t add up and indeed go on to say that the cylinders look like they have been manually placed at their respective resting positions. Forensic Architecture themselves conclude the bedroom cylinder was likely to have been moved and placed on the bed manually so on that point the FFM and FA agrees. They also share agreement with the various laws of aerodynamics and physics.

A projectile fitted with tail-fins will invariably orientate itself in a downward fashion thus hitting the surface nose-first. The OPCW doesn’t explain why this didn’t occur. Instead, they simply concluded that it did. They began their investigation at the bed and worked in reverse order matching the evidence to the conclusion and making it fit. The FFM team on the ground didn’t do this, as we know, it was their superiors further up the chain that seems to have sidelined and overruled them.

The funny thing is though that you couldn’t even replicate this if should wish too. Having spoken with several people with more knowledge in this area than myself they all agreed that with tail fins a projectile would hit the ground nose first and without them, it was continually spin aggressively hitting the ground randomly. Given that we can see the tail fins still attached to the harness then we can safely rule out the idea the cylinder spun out of control.

This idea that it then hit the floor and jumped onto the bed is preposterous to anyone with an open mind. It’s just silly and defies all rational thought. This is why after commissioning FA to carry out the investigation, Malachy Browne from the New York Times dumped the bed cylinder and focused on the rooftop one hence the name of his report: “One Building – One Bomb”. I informed Malachy that there were two buildings and no bombs but he never got back to me. Even at face value, these cylinders are not bombs as they have no explosive ability and do not contain any charge.

I showed, in a previous report, how Forensic Architecture are no strangers too shaping the evidence to fit a predetermined conclusion. After communications with their Bob Trafford, they designed several slides for me, without any request, in an attempt to defend Eliot Higgins of Bellingcat who couldn’t answer questions I posed to him some time ago. Bob dug into the Twitter arrives, found our exchange and spent time trying to explain Higgins’ position for him, something Higgins was unable to do himself.

So it’s no surprise here to see FA back at it again, making the facts fit and creating their own narrative.